My daughter's birthday was last week, and she received a gift from a friend of mine (who meant well) that rocked our world... and not in a good way.  But we created a happy, rescue situation regardless.  Here's what happened:

Anyone who knows my daughter knows she loves animals.  Which is why she usually receives something revolving around this theme whenever any gift-giving time comes around.  Sometimes it's an adoption certificate (ASPCA, WWF, etc.), a stuffed animal, a real animal, or all the above.  This birthday was an aquatic one.  She received (among other things) a new betta fish from me, and from my friend (again bless her heart, she didn't know what she was doing)...

two African Dwarf Frogs inside a tiny, 1/3 of a gallon plastic prison from Hallmark. 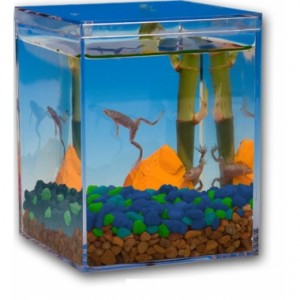 "Hallmark sells frogs?"  Sure enough there was a Hallmark sticker still on the side of the tank.  To be honest my response was "how cute are these guys?", but my daughter gasped and stood transfixed.  My friend and I thought she was in awe.  She wasn't.  "This is so bad!" ( Luckily this reaction didn't phase my friend.)

Now, I'm no herpitologist, but I do work with amphibians and reptiles (the local ones only, obviously) more often than most people do.   And, as a Naturalist, I should've known immediately that this little "habitat" was wrong - like my daughter did.   But this was the last gift my girl opened, and I was caught up in all the "birthday cheer" of the day.

We took a field trip to the local Hallmark.  Several of these aquariums were perched on top of a shelf and sold with picture frames and pretty paper weights (which is what I think this is supposed to be, sadly enough).  They are called "EcoAquariums" and they are made by a company called Wild Creations.  When we started to ask the clerk questions, she said they just got them in 4 days ago and had only just fed them for the first time.  It was pretty busy in there, and I didn't want to be confrontational until I knew more.

According to the "literature" that came with the frogs:
That sounded like a bunch of baloney to me.  So I called the experts on exotic frogs:  Fauna in New York.  I described the "EcoAquarium" and here's what they had to say:
"So I guess you will want to return them?"

An obvious first question my friend asked my daughter.  But, No.  If we return them, someone else will buy them, keep them in their cold, filthy prison and they will die.  My daughter's decision - which I support 100% - is to give them a better home.  I spent every bit of my free time this past week making sure I was doing everything I could to make sure these frogs have the best - and longest - possible life from now on.  And in eveything I did, I called/emailed Fauna and/or spoke to the aquarium specialists at my local pet store.  FYI - In case you were wondering, you cannot set these guys free as they are NOT part of your ecosystem (unless you live in the Congo region of Africa).

But we won't be shopping at Hallmark while these torture devices are still being sold.

Naturally we never would have bought something like this.  And if I had seen this at Hallmark myself I still would've done some research, made some phone calls, emails, letters, created a blog post, etc.  The post, however, would've been different, but with the same message:

Before Hallmark, there was Brookstone... 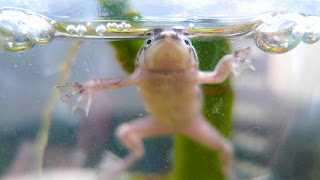 After 18 months of protests, thousands of calls and emails, and appearances outside Brookstone stores by a guy in a giant frog costume, Brookstone had finally decided to pull a product they called the "Frog-O-Sphere" (also from Wild Creations) from its shelves.

PETA started campaigning against the tiny plastic frog prisons after receiving complaints from Brookstone customers and after a whistleblower reported that frogs housed in the tiny 4in.H x4in.W x4in.D plastic boxes were neglected, deprived of veterinary care and adequate food, and kept in filthy water.  The whistleblower told PETA that when frogs became obviously ill and "unsaleable," they were moved to the store's storage rooms, where they wasted away and died.

PETA's undercover investigation of Wild Creations revealed filthy conditions and deadly neglect.  In some cases, frogs were so hungry that they chewed each other's legs off.  In some other cases, 37 out of 40 frogs died in shipment to the stores after they were left in a container so long that they suffered from heat prostration.

And now I give you Tom and Jerry in their clean, warm, 3-gallon tank with juicy blood worms in their bellies and a castle fit for a king to hide in! 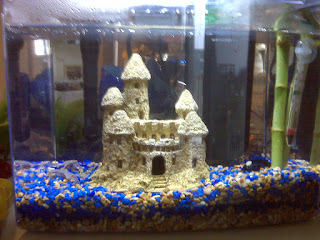 The boys will be given more room in the near future.  This is what we had on hand, and they're doing fine.    We just wanted them to live happily ever after ASAP.  ﻿

Note:
If you already are the owner of an EcoAquarium or a Frog-O-Sphere, please give them a better home, but first, get professional advice from your local pet store or contact Fauna.  Do Not transplant them without knowing what you are doing.  And DO NOT leave them where they are!

The lives of these helpless froggies are depending on you. 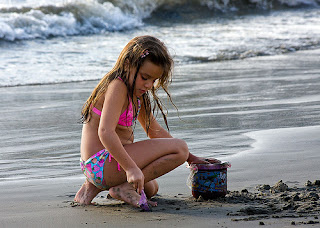 In my nostalgia for summers past and anticipation of summers to come, I think of swimming, kayaking, basking in the sun while wiggling my toes into warm sand at the beach, and reveling in the sights, sounds, and smells of flowers, bees, and birds.

For me, summer used to begin on the first day of school vacation, the season of long days.  But a more universal, and just as specific, beginning of summer (in the northern hemisphere) is the vernal (spring) equinox ("equal night"), when the night and day are the same length.

Members of many species, myself included, become more alive again at this first "scent" of summer.  Skunks come out of their dens, and we get the first whiffs of their presence.  Chipmunks emerge from underground and leave their first tracks on the softening snow.  The yearling beavers leave their dens as their parents get ready to have new pups.

Flower buds of the willows, alder, beaked hazel, poplars, and elms are poised to respond to the first warmth, to open and reveal their beautiful colors and varied forms.

Some of the birds that overwintered begin to sing, and the migrant birds are plying the skies by the millions on their way north from the tropics.  The first are starting to arrive.

Nature is about to burst at the seams.

The warming sun signals relief, and I'm ready.  The rest of nature has been waiting and getting ready as well.
Posted by Amanda at 7:07 AM No comments:

Here Comes the Sun... and You 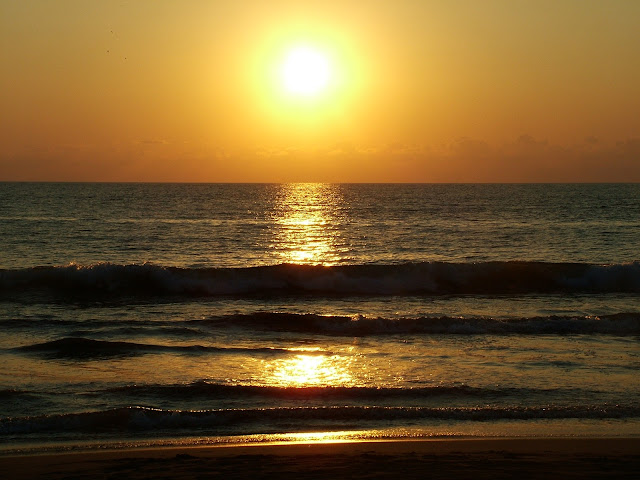 Spring arrives today at 23:21 UTC (for those of us in America that's 6:21pm Eastern Daylight Time).

Today is the perfect day to start a "New Year's Resolution."

Because, starting a New Year's Resolution in January, the most depressing month of the year, is unproductive, and, therefore,... depressing when you fail.

So, why not start all the healthy and productive ideas you've been having now?

You most likely tried to do these things on January 1st and then failed a week or two into it.

But now you have the sun!

So, why on earth would you think of motivating yourself to start something "out of the ordinary for you" on some of the most depressing days of the year and then be successful?

Well, if there was at least half a day's worth of daylight, and you were getting more minutes of it every day, you would be more motivated to accomplish those resolutions.

Studies show that it takes 28 days to form a habit.  So, if you were trying to change something about yourself, or your daily routine, and you wanted it to "stick," then you need to be motivated for at least 28 days to be successful.

The minutes of daylight in each day has been increasing since December21st.  But, at (or around) the Spring Equinox, each day has more sunlight than darkness.  And the sunlight will grow until June 21st of this year.

That's well over the 28 days you'll need to establish your healthy new habit!

And, the sun will still out-weigh darkness each day until September 23rd.  So, you'll be going strong with sunlight on your side for 6 whole months!

So, when winter (and next New Year's) comes around, you will have to think of a new "New Year's Resolution," instead of trying to find a way to re-do last year's failures.

But don't forget to wait until the Spring Equinox to actually start it.  You'll be more successful that way.

Don't know what to change about yourself?  Here are some suggestions, in no particular order.

The Apple Guardian's Best Resolutions You Can Give Yourself:

Posted by Amanda at 7:10 AM No comments: 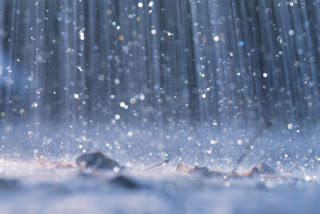 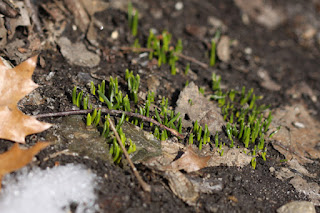 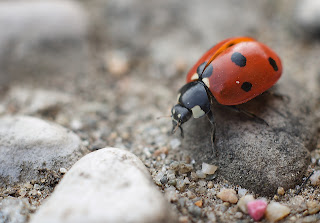 Plants, insects, animals wend their way up to Earth's surface. 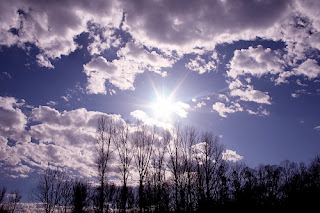 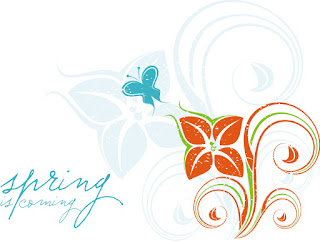 Happy March!
Posted by Amanda at 5:59 PM No comments:

Amanda
I'm a Master Naturalist and an outdoor enthusiast -- mostly kayaking, and I live on a Peninsula in the Chesapeake Bay. I'm the author of The Nature Fan, Nature Fan Activists, Green Earth Almanac, and Amanda's Geographic. Formerly, I ran the nationally syndicated column "National Green Activism" for The Examiner, and I was a key factor in the success of many campaigns. Make sure you don't miss a post, and subscribe by email! Thanks for reading.
Newer Posts Older Posts Home
Subscribe to: Posts (Atom) 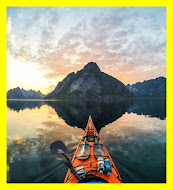